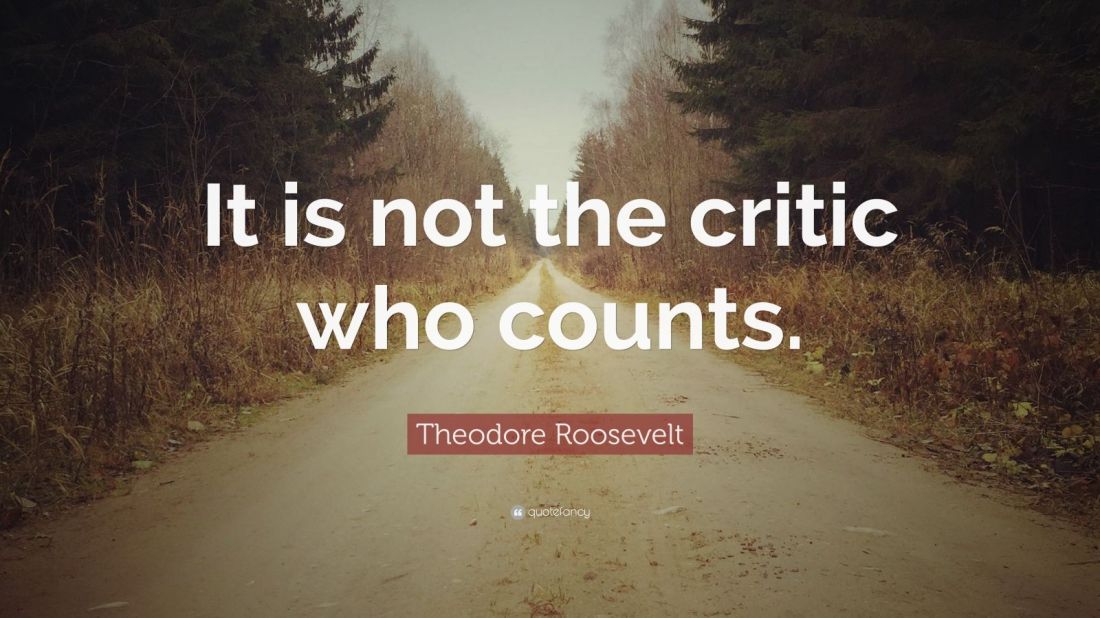 Motivational speaker and business leader Mary Kelly asked, “What is the best coaching advice you remember? In sports, business, life?”

I answered, “My Navy dad used to remind me of ‘The Man in the Arena’ quote. In other words, it’s easy for others to criticize when they are not in the thick of it. It has always stuck with me.”

Earlier in the week, I had also referred to this same quote by former U.S. President Theodore Roosevelt in response to a different question.

Then last night, looking through some old memorabilia, I came across a piece of paper my father sent me when I was stationed in Korea in the late 1980’s. It said:

It is not the critic that counts, not the man who points how the strong man stumbles or where the doer of deeds could have done better. the credit belongs to the man who is actually in the Arena, whose face is marred by dust and sweat and blood; who strives valiantly; who errs and comes short again and again because there is no effort without error and shortcoming; but who does actually strive to do the deed; who knows the great devotion; who spends himself in a worthy cause, who at the best knows in the end the triumph of high achievement, and who at worst, if he fails while daring greatly, knows that his place shall never be with those cold and timid souls who know neither victory nor defeat.

His handwriting below the quote said, “This is a quote from Teddy Roosevelt. Fawn Hall told Congress they should read it.”

I figured there had to be a reason this quote appeared three times in one week. Was I needing a reminder? Was it a post-Father’s Day thought? Something else?

My cousin told me family research revealed our great-grandfather was one of Teddy Roosevelt’s Sergeant Majors with the Rough Riders. Maybe that explains it.

Whatever the reason, I felt compelled to share the sentiment of “The Man in the Arena” with others. If you have something to add to the conversation, please do!

Today I feature a guest post from my brother, Eddy Ormond, from his recent trip to Indonesia. Eddy assisted me in writing my two books, and I’ve been encouraging him to write for the past few years. And he’s doing it! I hope you enjoy his story, and his storytelling ability. (Note: I posted this to my http://BelievingInHorses.com/blog, but the Comments feature is broken there, so re-posting here.)

My Rock from Bali

One time I thought I was going to die was when I was bodysurfing in Bali. The water looked calm enough with just a few small breaking waves, so with each wave I tried to ride, I swam out further to find a wave with more power. Soon I was further out than I had planned.

Before starting out, the Balinese man who rented lounge chairs to us crossed his arms and pointed to two red flags in the water indicating I should not swim between them. I understood that. So, I left my non-swimming Chinese friend to lounge beneath the umbrella as I set out to swim near a man who was teaching his daughter how to surf. I figured if I stayed near them, I was safe.

Soon, I began to tire, as the current was really very strong. I dug my toes into the sand as I realized I had drifted dangerously close to the red flag area. I did not know what was in there – coral reefs, rocks or a rip tide, but I was struggling to swim in the opposite direction to get away from it. Soon, the water was above my head and my toes left the ground as I battled to swim against the current and away from the flags. I looked for my surfing buddies, but they were gone. I was alone.

I waved to my friend on the shore. He waved back. I remembered he couldn’t swim, so I waved again just to alarm him of my peril. He nonchalantly waved back again. I panicked. Didn’t he see I needed help? I weakly raised my arm and made a beckoning motion to tell him to come closer. He simply waved back again. NO! “Come closer,” I signaled again. Now I just needed the moral support as I might be going under the third time. He waved again! This time it might be goodbye.

I looked around and saw no lifeguard chairs, no one nearby, nor any sign of rescue. I saw only one choice. I had to risk the dangers that lurk between the red flags and let the current push me into the red zone and hopefully ashore. I relaxed into a dead-man float and indeed, the current brought me to where I could put my feet safely on the sand and tiredly walk ashore.

I dragged myself to the lounge chair and plopped down. “Didn’t you see me drowning out there?” I questioned my Chinese friend.

In a “Confucius say” way he answered calmly, “One should never go swimming alone.” Drat! He was right. I had been so carried away by being on the foreign beach that I neglected some basic safety rules. Not to mention, he could not swim! I tried to release my pent up feelings by silently chanting “xiqi (shee-chee), huqi (who-chee) ” or “inhale, exhale” in Chinese, while concentrating on a man nearby who was sweeping the beach clean of all debris, including shells and pebbles.

Sand was weighing down my shorts so I stopped my meditation, got “back on the horse” and went into the water again to rinse myself. I had wanted to pick up a shell for my friend, Linda, but as I mentioned they swept the beaches there to keep them pristine. Then it happened. A fist-sized rock rolled over my foot with the incoming wave. Tickling my ankle, it tumbled backwards with the undertow – my undertow. I had to have it! I scurried after it and quickly grabbed my prize. Holding it down to my side, I promptly brought my secret prize to the chairs and showed it to my scowling friend who asked, “Why do you do such a thing?”

“This is my rock from Bali!” I cried. “Whenever things get bad, I will look at this rock and remember life could have been worse because I could have drowned here today. And when I worry about things too much, it will remind me to drop the rock, so, like today I will not drown.”

Thank you, Eddy, for sharing your true story, and please keep writing!